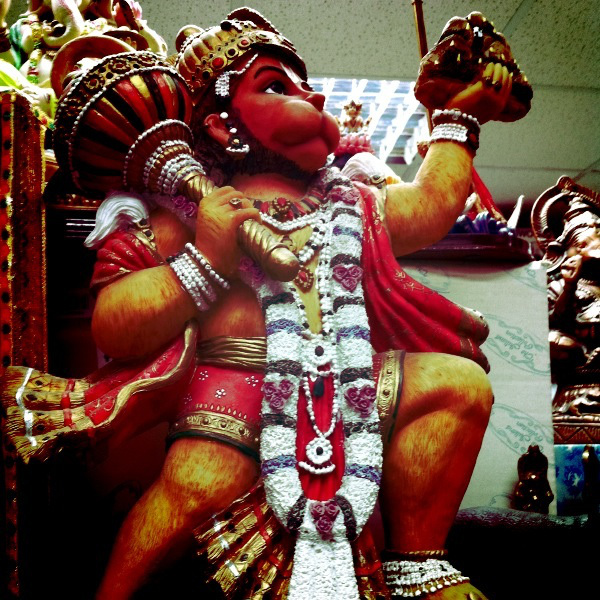 In 2012 private funds paid to erect a Ten Commandments monument on the grounds of the Oklahoma State Capitol. A 2009 state law allowing privately funded religious monuments on public grounds paved the way for the Ten Commandments to sit in granite outside the capitol. Seeing an opening in the new law and the new monument, earlier this month, a Satanist group from New York announced plans to build their own privately funded monument next to the Ten Commandments as “an homage to Satan.” The Satanists have only raised $2,700 of their $20,000 goal-though maybe a more modest homage could be designed. Then, this week, a group of Hindus led by the indefatigable Rajan Zed announced plans to build a monument of their own-the Hindu god Hanuman.

It’s important to notice the different reactions the Satanist and Hindu plans elicited from Oklahoma officials. On the Satanist monument:

“I think it is a joke,” said Senate Pro Tem Brian Bingman, R-Sapulpa.

“This is a faith-based nation and a faith-based state,” said Rep. Earl Sears, R-Bartlesville. “I think it is very offensive they would contemplate or even have this kind of conversation.”

On the Hanuman monument:

Rep. Earl Sears, a Republican from Bartlesville, Okla., who called the Satanist monument offensive, was less inclined to speak directly about a Hindu monument.

“We have a system in place to process these requests,” Sears said. “I stand by my comments that we are a faith-based nation, and I know that once you open the door on this sort of thing that you can’t know where or how it will end up. We’ll just let the system work.”

Trait Thompson, chairman of the Oklahoma Capitol Preservation Commission, which approves all monuments, declined to comment, saying only that a good-faith application would be voted on by the commission.

Why don’t the Satanists get to take part in the system? On one level this is yet another example of how religion is a category up for grabs in American culture that is constantly being redefined. For the Oklahoma officials Satanism is not a religion or a faith, ergo it does not get to work through the system. Hinduism is a religion, a world religion no less, in their eyes and so it gets a chance.

But from another angle, this is also a matter of religious difference. Religion only exists when it is a term that encompasses a set of different things. It is a term that necessarily connotes variety and difference. What gets in or out of that term, what that term contains, is always up for grabs. But the term is always an attempt to cordon off a set of cultural somethings.

So note that the the 2009 bill that began this whole controversy makes no mention of religion. It is quite narrow and focused on one thing: the Ten Commandments have an important place in American morality and law. Only at the very end does the specter of religion and its tidal wave of difference and diversity loom.

The placement of this monument shall not be construed to mean that the State of Oklahoma favors any particular religion or denomination therof over others, but rather will be placed on the Capital grounds where there are numerous other monuments.

Smartly played. This monument is not going to open the flood gates for “particular religion,” the bill claims. It does take part in diversity, though; the diversity of monuments already on the capitol grounds. We’re adding a different monument to the monuments, not a different religion, the bill argues. In fact, this is what Rep. Mike Reynolds argued:

“Rep. Mike Reynolds, R-Oklahoma City, said the New York group is trying to place a monument on the Capitol grounds for religious purposes and will be unsuccessful. The Ten Commandments monument, on the other hand, was put up for historical purposes, Reynolds said.” It’s not about religion at all, but about history.

The Satanists, the Hindus, and the constitutional law professors disagree:

But Joseph Thai, a constitutional law professor at the University of Oklahoma, said the decision to place the Ten Commandments monument at the Capitol could put the state in a difficult position.

“The state can disown the Ten Commandments monument erected at the Capitol with private funds as private speech, but then it cannot reject other privately donated religious monuments — even a satanic one — on the basis of viewpoint,” Thai said.

Or the state could decide to exclude other religious monuments by taking ownership of the Ten Commandments monument as official state speech, but Thai said that could become legally problematic because of the sectarian message on the granite statute.

“The Legislature has put the state between a rock and a hard place, constitutionally speaking,” Thai said.

Either everyone gets a seat at the table or we do this to the table:

And so the table, or the Capitol, must make room for Satan and the Monkey King. Because as soon as religion gets to the Capitol, it brings diversity with it. It’s important to note that when folks are given a seat at the table good table manners are not always the norm. For example, the same Rajan Zed that is planning the Hanuman monument had this experience when delivering a prayer on the floor of the U.S. Senate:

(Side note: I discuss this episode a bit more in the conclusion of the book manuscript I’m currently working on.) The Senate prayer hecklers and the Ten Commandments monument builders assume that America is a Christian nation. What that means, I’m not sure exactly. But it is markedly different from the claim that America is a religious nation. The former is a claim that allows the Ten Commandments to exist as historical and not religious. It is a claim of religious hegemony. The latter claim anticipates religious difference and requires accommodation for it. The authors of that 2009 bill knew this and in marking the Ten Commandments as historical they avoided the religion question altogether. Subsumed under history, the monument maintained Christian cultural hegemony. Even if it was misspelled. The question that emerges from this brouhaha in Oklahoma, then, is “all religions or no religions?” but “religion or Christian hegemony?”