The American Academy of Religion and the Society of Biblical Literature released a new report about the job market based on data drawn from the AAR/SBL job listings for the 2013-2014 academic year. The report builds on previous data that dates back to January 2001.

Graduate programs in religious studies and theology should hand this report to their incoming students. They should email it to everyone in their program. They should have a seminar on it for their first-year students. Make it required reading and spend an hour discussing it. Have the conversation.

Here four takeaways I got from the report.

1. We must redefine what success looks like for a Ph.D. graduate.

Generally speaking, success for a Ph.D. graduate meant a tenure-track job. On one level, that view is backed up in the report. 80% of the jobs listed in the SBL/AAR listings were tenured or tenure track positions.But when you look at who got the jobs, the numbers have an interesting ambivalence.

First off 90% of appointees completed their degree before they started their job. But what does that mean?

So, only about a third of the jobs went to people fresh out of grad school. The others all spent at least a year doing something else-either outside the academy or in some sort of “contingent” position.

@burnidge @MichaelJAltman will be interesting to watch departments transition to deemphasize R1 jobs as success. Teaching experience a must.

This is the new normal. Most Ph.D.s will spend time bouncing around various positions before they land that tenure-track job. If you don’t get a job right out of grad school you have a better chance of getting one two years or more after you graduate. Success isn’t a tenure-track job, success is a job period. And we might not even be able to measure success until you’ve been out of grad school for 5 years. Why is this?

The organizations have gathered data on the skills and/or experiences desired or required by hiring institutions since the 2001-2002 AY (Table 17), though unfortunately data are missing for the 2008-2009, 2009-2010, and 2010-2011 academic years. Holding a Ph.D., prior teaching experience, and interdisciplinary teaching or research abilities continue to be ranked highest among the twelve options.6 A majority of institutions required (59.5%) or desired (10.6%) candidates to hold a Ph.D. Almost half of hiring institutions required (29.9%) or desired (18.1%) prior teaching experience, while over one fifth required (9.7%) or desired (12.2%) interdisciplinary teaching or research abilities.

One reason for that 34% of appointees who had been out of grad school for two years or more may be the desire for teaching experience among hiring departments. Those years between graduation and tenure-track appointment are often filled with contingent teaching. Ph.D. departments that want to produce competitive candidates should be intentionally building constructive teaching experiences and pedagogical development into their programs. This does not mean that graduate students should be overloaded with teaching a ton of courses on their own from the very beginning. “Teaching experience” can be an excuse to dump heavy teaching loads on under-prepared and over-worked graduate students. Rather, it means that teaching will be part of a broader professionalization of graduate students.

3. You better be able to work in a public institution.

Two of the key findings of the study:

A friend posted a smart critique of takeaways 1 and 3:

“I’m not comfortable with the way you’ve phrased takeaway #1 or #3: you continue to maintain the very unhelpful status quo idea of “success” as a teaching position. You revise expectations “downward,” I suppose, but you don’t look outside of teaching at the college level as any form of “success.” I think this expected outcome, and the way that graduate programs indoctrinate students into this form of reproduction, is one of the most myopic and harmful aspects of PhD programs in our discipline. We need an entirely different kind of subject formation that has a wider vision of “successful” outcomes.”

I agree that we have to broaden outcomes beyond just teaching positions. However, this report has nothing to say about that. One takeaway then, is that a report like this is too narrow to address the larger question of what counts as success for a Ph.D. graduate.

My biggest critique of the report is that it relies on course load data to measure the teaching work positions require. 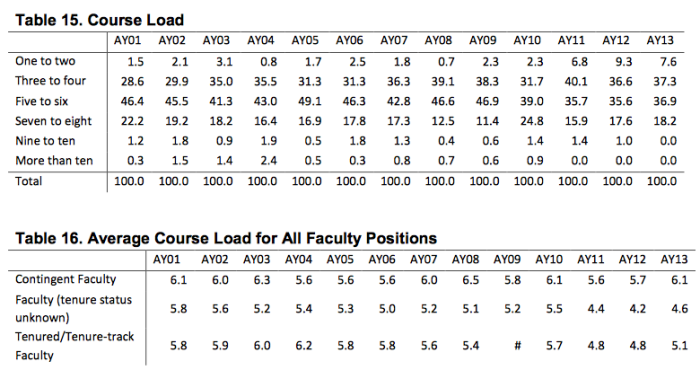 This course load data shows that contingent faculty are teaching more than their tenured and tenure-track peers but it doesn’t tell us how many students any of these groups are teaching. Rather than measure course load, it would be more useful to also measure credit hour production. Are those six courses taught by contingent faculty filled with 100 students, while the tenured have four and a half seminars of 15 students? We don’t know. Course load doesn’t tell us who is really making the donuts in the department. For example, I had a 4/4 course load last year as a contingent instructor but I only had a total of about 100 students. Meanwhile, one section of introduction to religious studies taught by a tenured faculty member had 150 students on its own. See, credit hours and enrollment matter.

My own personal takeaway from the report is that I am both lucky and typical. I am incredibly lucky to have gotten a job in a year when job listings were down. I am incredibly typical because it took a year of heavy teaching as a contingent faculty member to  gain teaching experience that made me a strong candidate.

2 thoughts on “Four Takeaways from the AAR / SBL Jobs Report”