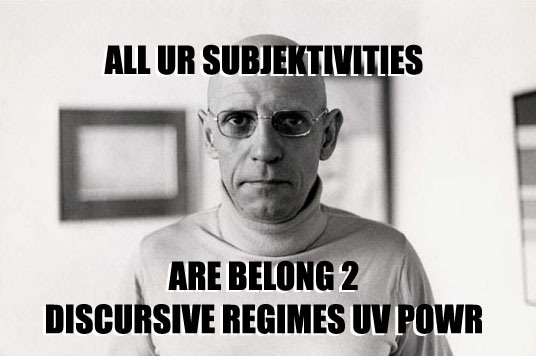 I just started (binge) watching the USA show Mr. Robot. Itâ€™s good. You should watch it. One thing Â really like about the show is that it often turns critical attention the language of freedom and choice in our society. The whole show is really built on the question of how free we are in modern neoliberal late capitalist America. Of course, all of this on a network owned by Comcast. I especially liked this scene from the second episode:

Choice seems like a moment of freedom. Itâ€™s agency, right? But choice always happens within regimes of power that dictate the choices on the table. Choice is an illusion. And, as the show explores, it is the illusion of choice that constructs the modern self as consumer, voter, actor, and agent. Yet that self is always hemmed in. Choice is never free. Our choices are always between the things given us.

And so, letâ€™s look at the two options presented by the nominations committee of the American Academy of Religion for AAR Vice President. One the one hand there is David Gushee, a professor of Christian ethics and director of a theology center at Mercer University. On the Other hand there is Kendall Soulen, a systematic theologian at Wesley Theological Seminary. Whoever is elected Vice President will serve as VP for a year, then President-elect, and then, finally, President. They will have three years of work within the AAR and one year of important influence as President. They are elected by the AAR membership.

For members of the AAR who, like myself, do not do theological work, who do not engage in constructive work within a religious tradition, who approach religion as social/historical/cultural/discursive construction, and who work within state universities, there is no representative candidate. I am not a theologian.

While there is a lot that could be said about the two candidates-and I encourage AAR members to investigate who these candidates are beyond their brief AAR statements-it is the lack of a real choice that I find frustrating in this situation. Looking back at the last three years, the nominations committee has offered members a choice between a theologian/constructive/ethicist candidate and a more religious studies/historical/cultural studies candidate. Granted these categories are my own invention and imprecise, but a look at the candidates reveals real differences in their approaches to the study of religion. For example, last year Eddie Glaude, a historian in a religious studies department,Â won against Dwight Hopkins, a theologian in a divinity school. Before that, Thomas Tweed won against Mark Jordan-another historian/religious studies scholar winning election over a theologian (though Jordanâ€™s work is much broader than just theology, in my view). Three years ago bioethicist Laurie Zoloth defeated religious studies scholar Naomi Goldberg. My point here is that for the past three years at least, there has been a choice between two scholars with very different approaches to the study of religion and, one would assume, different visions for the AAR. I donâ€™t know if this has been the case even further back because such information isnâ€™t readily available.

Either way, the decision to nominate two Protestant theologians, one of whom is an ordained Baptist minister, strikes me as major problem. Thereâ€™s not a real difference between Soulen and Gushee in their vision for the future of the AAR. For example, hereâ€™s Gushee on the need for methodological diversity within the AAR:

Both candidates want more theology in the AAR and they want those who do critical work to play nicer with the theologians. That many AAR members would consider a Baptist minister and theologian their subject of study rather than their conversation partner doesnâ€™t seem to strike either candidate as a problem. That critical scholars of religion might not want to “hospitably” “embrace” their data and would rather the AAR spend its energy promoting and supporting critical academic work in religious studies is ignored. “Methodological diversity” is assumed to be a universal good without any fear about how such methodological diversity can lead to institutional and disciplinary incoherence.

How do I defend my discipline to my dean and my students if our major professional organization chooses to build a tent so big itâ€™s incoherent?

More to the point, why has the deck been stacked? Why is the only choice for our future AAR leader a choice between theology and theology? Why even give us the illusion of choice?

But of course, I should know better. Critical scholars of religion should know better. Because this is how institutions work. AAR activities produce AAR members. It is only in this moment of frustration at the AAR election that I really feel like an AAR member and thus the power of the institution is reinforced. In short, it doesnâ€™t matter what the election is, it only matters that there is an election. Because the illusion of choice reinforces the authority of the institution.

Yet, I still wonder why the nominations committee chose these two candidates. Was there a fear that weâ€™d have a third straight religious studies scholar VP? Are there theologians out there complaining?

Only the people on that committee know. And weâ€™ll probably never know. And one of these two candidates will win. And the AAR will go on. And Iâ€™ll be there in Atlanta this November and the next year too.

Aaron Hughes, at the University of Rochester, has published his own open letter to the members of the AAR expressing his fears about the nominations. As he puts it,

The key phrase for me here is â€śrich diversity.â€ť I do not see any diversity whatsoever in these two candidates or in their visions for what the AAR should be. I think that the Nominations Committee has, thus, failed in its mission of providing members with a real choice of intellectual vision.

He is boycotting the election.

For my part, I did not cast a vote for the VP or for the At-large member of the board. I did vote in the other elections.

3 thoughts on “UPDATED: The AAR Vice Presidential Election and the Illusion of Choice”