Food and Spirituality in the South: Chick-fil-A and Bessinger Bros. BBQ 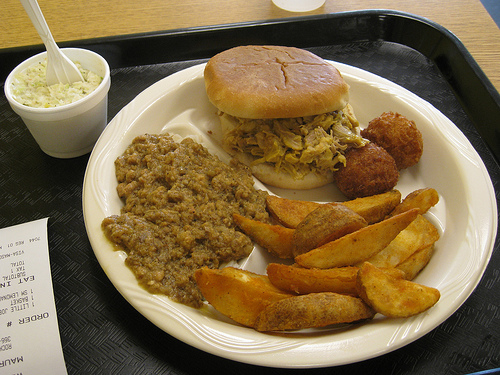 A couple delicious articles crossed my plate just before the Christmas weekend and I didn’t want the connections between them to sneak by. Over at the wonderfully put together museum of religion and spirituality with a hipster aftertaste, Frequencies, Darren “DEG” Grem has written a piece that dives into the spirituality of the Chick-fil-A sandwich. Meanwhile, in the [web]pages of New York Times Magazine I came across a piece from Jack Hitt on the barbecue feud that has torn apart the Bessinger  family of South Carolina in the past two decades. I have spent my whole life in the South. I’ve spent the past four years in Atlanta, where you can’t throw a rock without hitting a white Styrofoam cup of Chik-fil-A lemonande, and before that I spent six years in different parts of the mustard based barbecue region of South Carolina. Reading Grem and Hitt reminded me of the ways food in the South partakes of the sacred, the political, and the domestic. Not that it doesn’t do these things in other places, but in the South I can speak from the privileged place of an insider with experience.

That spirituality in the marketplace, or in the chicken sandwich, is both real and illusory at the same time-that it is always already revealing and obscuring-is Grem’s strongest point. He writes:

We can’t take Chick-fil-A’s claims about its sandwich at face value because we lose something in the process. We lose the connection between spirituality and the people who make up the marketplace and the networks and chains that support contemporary capitalism. But we also can’t just dismiss these claims about the spirituality of work, of goods, of companies, of people—or stop with investigative exposés of how it has or has not filtered down to the bottom or up to the top of the corporate triangle. That doesn’t really dive into the messy endeavor to explain spirituality in the marketplace, either as a complicated and layered phenomenon or as an organized but diverse and divided movement.

Indeed, spirituality is messy. It is material. It is juicy and topped with pickles. And sometimes it  pays for bowl games. Grem challenges those trying to trace the role of spirituality in the market and the market in spirituality to go further than simply following the money, or the prayers, or the products. Where that leads I’m not completely sure and Grem doesn’t completely reveal but I think the Lowcountry of South Carolina offers us up a case study.

Jack Hitt’s article on the Bessinger brothers various chains of mustard sauced barbecue in the Lowcountry of South Carolina is worth a full read and, for me, served as a reminder of the shock I experienced when I first encountered yellow barbecue. Having grown up in North Carolina my tongue was trained on vinegar and I could never accept the Gospel of the mustard seed. Then in college I gave up pork altogether and so I took my place on the sidelines of the great barbecue debate-though I don’t think that dry stuff  from down in Alabama ever stood a chance.

Hitt’s article focuses on the fallout between the four Bessinger brothers, each of whom are in the BBQ business, in the wake of Maruice Bessinger’s decision to raise the confederate battle flag over each of his Maurice’s BBQ restaurants. This was Bessinger’s response to the decision by the South Carolina legislature to remove the flag from the roof of the capitol building. (It has since been moved to a gilded pole in on the capitol grounds, a spot more visible than it ever was way up on the roof.) Maurice’s older brother Melvin, who owns Melvin’s BBQ in Charleston, avoided politics and has seen his fortunes improve as his brother’s neoconfederate ideology continues to hinder his business. In some ways the whole story is a Cain and Able narrative but everyone has the meat in their offering.

What jumped out to me in the article and why it connected to Grem’s piece was the following:

Maybe 200 people turned out at the post-rally barbecue at Maurice’s bottling plant. He had set up a giant shed to seat 500, so the gathering looked like a failure. The machines were walled off by pallets of Maurice’s boxes, each stamped with the word ”Kosher.” Maurice, a lay preacher, began the long afternoon of speeches.

”This is our only hope,” Maurice explained, pointing to the giant Confederate flag behind him. ”As the government gets more and more tyrannical, they will hand over more power to a world government. And then the Antichrist will just come in and say, ‘Thank you very much.”’

Maurice is comfortable weaving religion with barbecue: there is a weekly Bible-study session at each of his pits. Later on, in the privacy of his office, he let slip a secret of his sauce. ”The recipe,” he said, ”is in the Bible.”

”Does it start with Jesus’ parable of the mustard seed?” I joked. Maurice’s eyes flared, as if I had correctly guessed that his middle name was Rumpelstiltskin, and he refused to discuss it further.

”You can just say that my Carolina Gold is a heavenly sauce,” he said. ”I believe that after the rapture there will be a big barbecue, and I hope the Lord will let me cook.”

Hitt was tantalizingly close to getting at the spirituality of the barbecue. But he made the mistake about which Grem warns. He got flippant. He thought he could see through the Bible study to what was “really going on.” And Bessinger clammed up. Neoconfederate ideology, conservative Protestantism, pork infused apocalypticism, and the faith of a mustard seed; how do these add up? I really want to know. The mess that Grem prods us towards has been quickly yanked back from Hitt. The connections between the spiritual and the material, and even the political, are there. But what are they?

What does the sacred taste like? Who brings the potato salad to Jesus’s mustard based glory? What makes those chicken sandwiches so God blessed delicious? (And DEG, you forgot about he biscuits.) To find these answers we must resist the urge to make jokes. We must remain humble and quite. We must listen. Then maybe we’ll find out what it will be like when Christ returns to bless the righteous and smite the tomato and the vinegar based.

Oh, and if you are looking for barbecue in South Carolina, I recommend Shealy’s in Batesburg-Leesville. If you can’t find it just ask anyone you meet west of Columbia.

[Cross-posted at Religion in American History]